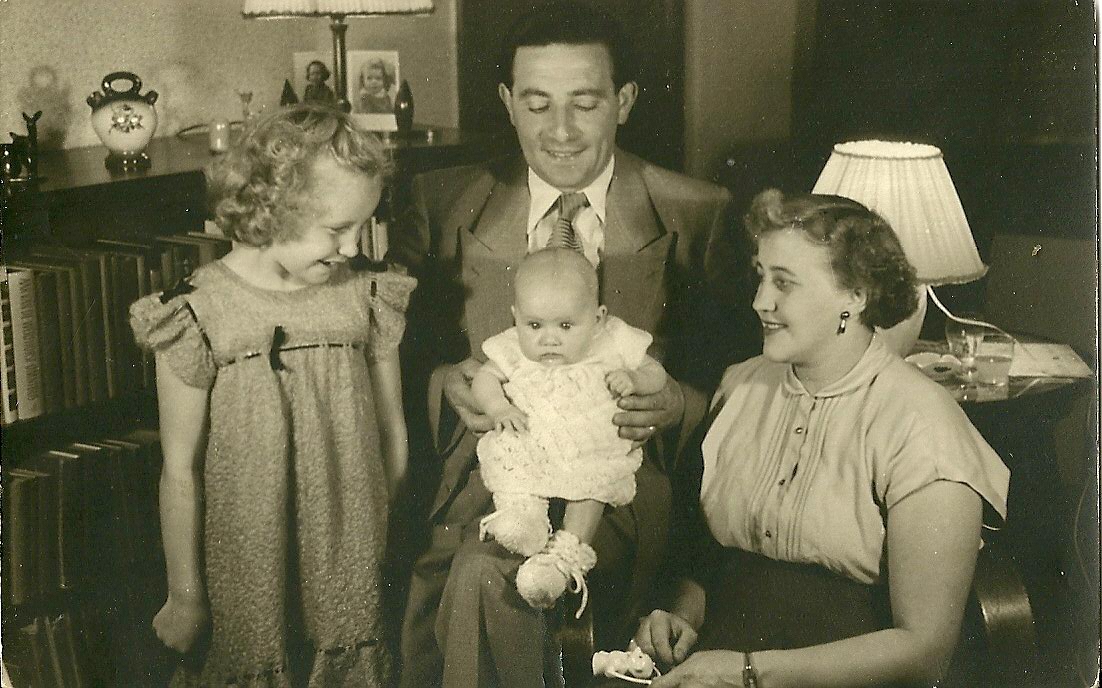 17 Feb WW II is Over, the Effects of the Holocaust Are Not

A Zoom presentation by Sara de Vries at The Descendants can’t be boring and it isn’t, not for a second. “It made me laugh and it made me cry,” one of the people attending the session comments. “It was moving, it touched the heart.”

A Zoom talk on the effects of the Holocaust, how it affects an individual, the influence it has on the surviving relatives, what growing up was like. Essentially the session is about pinpointing personal experiences in an overwhelming chaos of destruction. No easy task. Sharing intimate feelings is not something you just turn on and off. This is precisely what makes Sara de Vries such a brave woman, because by telling her story, she makes us aware that the narrative on the Holocaust is not complete until the second generation has also taken the stand. The reality is that the repercussions of genocide continue until the generations to come have finished saying what they need to say.

Sara points at the photograph behind her on the screen. A typical picture of a smiling family in a living room setting. The focus is totally on the baby. On the dresser in the background, there are two photographs in frames.

“My parents,” Sara says, “Max (Marcus) and Jos and my half-sister, who was seven years older than me. Half-sister is such a weird word because we really considered each other 100% sisters. The three-month-old baby, that’s me. ( … ) The interior you see is authentic, what I mean is just like it was in the war, because this was originally the home of my Uncle Aron, who was three years older than my father. He lived here with his wife Eva and their daughter Lineke. ( … ) If you look carefully, you can see my mother is holding a rattle in her left hand. It belonged to my murdered cousin Lineke ( … ) Do you see the lamp on the dresser with two small photographs under it? They are of my Aunt Eva and my cousin Celine, who everyone called Lineke. ( … ) The door next to the dresser was dark green, that was where my sister slept. Before and during the war, my Aunt Eva’s sister Margaretha lived there.

We lived in that house up until the 1960s and it is where my father was hiding in the war. The floor in the living room was made of wooden boards,  there was a square trap door and under it, that was where my father hid. On the sand. In a storage space less than a yard deep. To open the trap door you had to roll up the carpet, lift the folding bed and tug the linoleum at the strip along the wall. In the evening or at night when the blackout curtains were shut tight and it seemed safe, my father would come crawling out of his hiding place. (…) The books in the dresser are still the same, my father must have read them a hundred times in the war. That is what he always said. I can tell you that for the rest of his life, my father never read a single book. “I read so much in the war, it was enough for the rest of my life, he would always say.” (…)

“I slept in Lineke’s bed, wore her clothes, and played with her toys.” Sara makes it clear that the war never really ended and when she was born in 1954, there was still plenty of baggage left for her. Not that anyone ever talked about it much, that wasn’t the problem, you just noticed things. “My father kept waiting for his brother to come home, and from the few little things he said, I could reconstruct the story myself. The pieces of information were few and far between, but you could tell the war was eating him up inside.”

“The house was on Transvaal Street and he had it transferred to his name after the war. He bleached his black hair with hydrogen peroxide and had a special pass because he worked for the Jewish Council. He was a janitor, nothing special, but he cleaned the Sicherheitsdienst (SD) offices on Euterpe Street and there was nothing ordinary about that. He saw what the Grüne Polizei did, he mopped up the dried blood and saw the packages relatives would bring for the people who were deported. Packages with clothes and food that were never sent anywhere, packages with maggots creeping out of them.”

Max de Vries did not have any illusions about the Germans. “Father used to walk around without a star,” Sara says, “and someone from the neighbourhood reported him to the SD. They tortured him, beat him till he couldn’t walk. At a given moment a man by the name of Jupp Henneböhl took him from the Museum of the Tropics to the Holland Theatre. It was one stop by tram, but they waited and waited and the tram didn’t come. Suddenly Henneböhl said Run, Jew, Run and Father fled.”

The Liberation didn’t really liberate anyone. It is true that Max met his Jos and with their daughter, the three of them were a little family, they had a house (which a lot of people didn’t after the war). But the world was a nasty place and the post-war period only intensified their sadness. Taking life for granted, feeling secure as part of a large family just was no longer the case for Jews. “My parents didn’t want to have children together,” Sara says. In their own little world, her arrival was an accident. Unwanted, but part and parcel of the glum family lifestyle of the fifties. Everything was waiting for her, an entire layette, clothes for a little girl and toys. Everything was Lineke’s. Sara wore her clothes, played with her toys and imagined what it was like to be Lineke. To experience what she had experienced, to be murdered. Father Max would tell her something now and then and Mother would say, “Shh, Father.” Sara’s home life was problem-ridden, school TOOK her mind off of it but with their anti-Semitic teasing, the children in the Transvaal neighbourhood only added extra stress.

“A family of former collaborators, the Lijmbergs, lived a couple of doors down. He had even been one of the Schalkhaar policemen, collaborators of the worst kind.  People who clearly expressed what was left of their Nazi leanings by hissing at my mother when she was hanging up the laundry in the back yard.” Mr Lijmberg insisted he did not want his daughter sitting next to that Jewess in the classroom.

Max de Vries earned his living with a stall at the outdoor market. He had long since ceased to observe Jewish customs and holidays. G-d had allowed such awful things to happen, but when Max went to work on Yom Kippur and another survivor commented, he broke down. He was speechless, scared, very scared. The war was inside of him. The war was always there and everywhere.

Max seemed to act as a magnet for former collaborators. Henneböhl, the Grüne Polizei man with his Run, Jew, Run once sat right behind him at a soccer game of the favorite Amsterdam team Ajax. “That was in the mid-sixties and he shouted, Hey you, Jew! My father froze, he couldn’t budge. And a while later, as if it was the most normal thing in the world, Henneböhl came over to our house. The man knew no shame. Henneböhl wanted my father to write down that he had saved his life. To keep him safe, just in case anyone would ever want to charge him with anything.” ( …)

“I was furious at my parents. He would just drop in whenever he felt like it. I couldn’t stand it any longer, I just screamed at my parents, I was so angry! Angry that they didn’t stand up for themselves. I kicked him out of the house.”

In the Zoom session, no one says a word. Sara talks about how she went to Israel after that. She felt good there, but her parents begged her to come home.  When they refused to give up, she finally came back to the Netherlands. Soon afterwards, her father died. He was still a relatively young man. There was no doubt about the cause of death. The war. Her father died of a broken heart.

Sara looks straight into the camera. Her life went on. She became a nurse, had a creative job at an advertising agency, got married, had children. “But the past regularly caught up with me.” She explains that she can’t cope with injustice and gives guest lectures about the war a couple of times a year. She has researched the working and the effects of genocide in a person’s past. She paints and writes, and has published articles in Jewish Houses. And she is active for The Descendants of the Shoah Holland because the present-day generation of politicians and civil servants is not aware of what the Holocaust destroyed or of the important message it conveys.

“This is not the past, this is today. My father was certainly not a fan of Henneböhl, but people and human behaviour don’t change, let’s not have any illusions about that.”