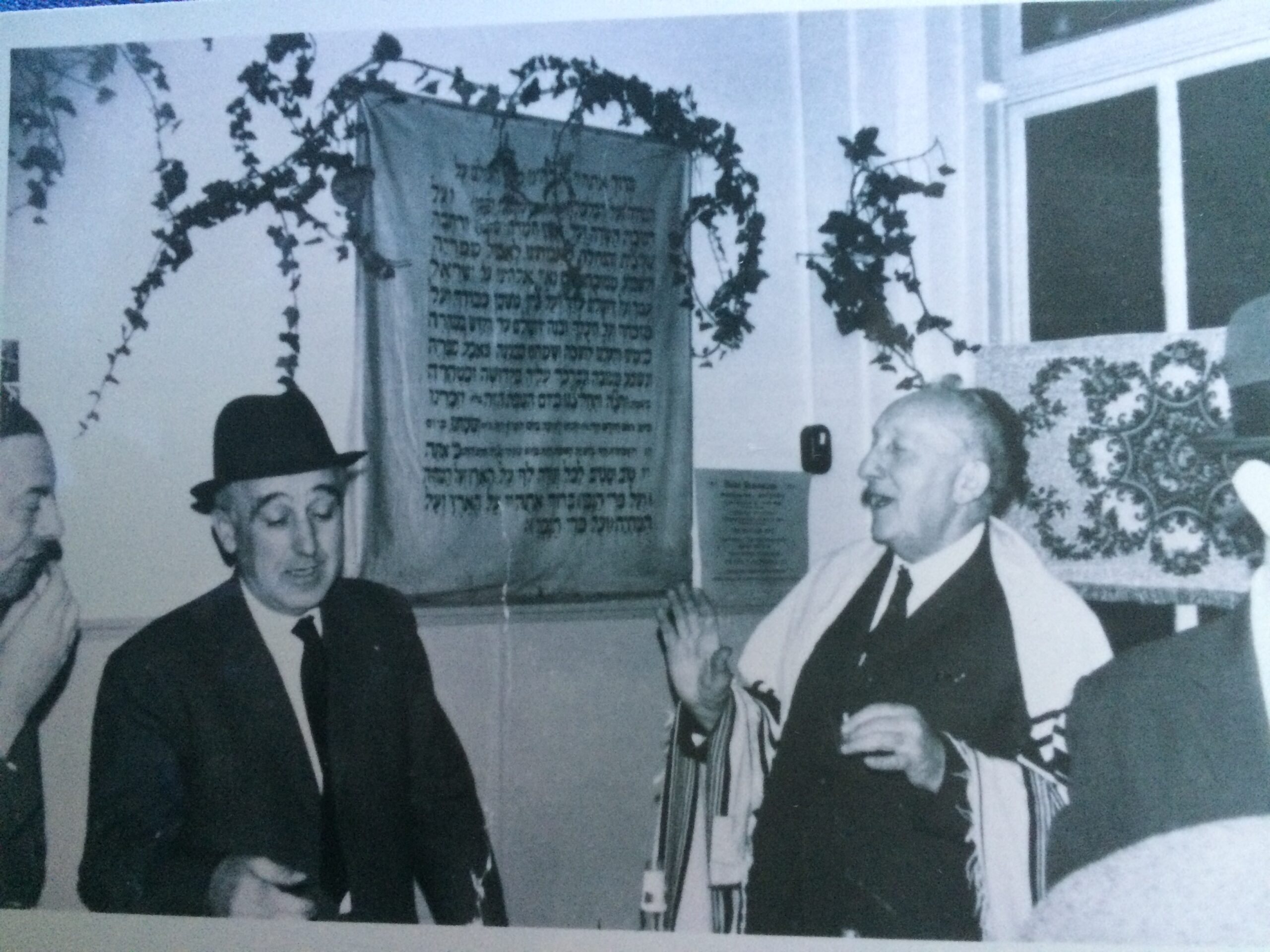 ‘The Polish claimant Jeremias Barth, referred to in Section 2, Part 1, was born in 1894 in Rzeszow, Poland. He came to our country in 1938 and is integrated here. During the war years, the claimant proved to be deserving of Dutch citizenship. Employed as a dentist at the Jewish Theatre (Hollandsche Schouwburg) in Amsterdam, where Jews were incarcerated before deportation, he enabled a number of other Jews to escape. He was arrested in 1943. However he soon managed to flee and remain in hiding for the rest of the war. The claimant is married to a Dutch woman. After the war he got his medical degree in the Netherlands and has an adequate income from his medical practice.

National State Publication on behalf of Her Majesty Queen Juliana, Queen of The Netherlands.’

This quote is from the proposal for the naturalization of my father Jeremias Barth and our family in 1953. He was one of a number of petitioners. This is a fragment of an official document with a brief allusion to something my father never said a word about to me nor my brothers, not at any point in his long life. Helping Jews escape? Him? A  Galicianer ?

The roots of my father (21 October, 1894) were in Polish Galicia, which  was part of the Austro-Hungarian Empire up until world War One. A vast region with a large Jewish community that fought enthusiastically in World War One by joining the Kaiserliche und Koenigliche Armee to combat the anti-Semitism of Czarist Russia. My father was a member of 40th Regiment that went to battle against the army of the Czar in 1916. The performance of the Jewish soldiers was very good, and at first the Austrian army was victorious. Our father Jeremias Barth was wounded in this battle. He was stabbed in his left thigh but recovered after three months at the Hrubisko field hospital.

When the war was over and the empire became a republic, our father moved to Vienna to study medicine. The Viennese Faculty of Medicine had an excellent reputation at the time. There were specialists there like Julius Wagner-Jauregg, the psychiatrist who won the Nobel Prize for Medicine in 1922. Vienna was also the centre of Jewish Intellectual Europe.

After completing his studies, Jeremias worked for a short period as an ophthalmologist and then switched to dentistry, a field that fell under medicine at the time. He soon had a successful practice on Ottakringer Street in the Austrian capital and in 1936 he married Gertrud Bunzlau, who also came from a Jewish family. My eldest brother Peter was born in 1937. They must have been happy together, but it was not to last very long. The Anschluss (annexation) of Austria to Nazi Germany in 1938 quickly made life impossible for Jews there. Anyone who had money left the country, and those who stayed behind were ultimately deported. We know how that ended. Jeremias and his family were evicted from their home and out on the street, his practice confiscated. With the help of the Jewish community in Vienna, which served as Emigration Office under the new German authorities, Jeremias managed to get visas for his family to the United States. They arrived in the Netherlands in the winter of 1938, intending to travel from there to the U.S. For reasons that are not clear to me, their departure was postponed several times and in May 1940, after the German invasion of the Netherlands, it was no longer possible to leave.

In the week before the February Strike on 25 February 1941 (a general Strike organized by the then outlawed Dutch Communist Party), there was rioting in the vicinity of Waterloo Square in Amsterdam. We know the first large-scale round-ups were on 22 and 23 February. Gertrud Barth Bunzlau was arrested on the 21st after one of the riots. The police intervened, the bridges were raised, she tried to run away, there was shooting and she fell into the canal. The official cause of death was an accident on February 22.  An early victim of persecution we might say today. Jeremias, left with a small child, must have been at his wit’s end. With the help of the Jewish Council, he nonetheless managed to find a job as a dentist at the Jewish Theatre. Dental care just before deportation, it sounds ridiculous. It is doubtful whether Jeremias believed they were all going to be put to work somewhere, an idea so many Jews clung to. His Eastern European background made him suspicious of the occupying army’s intentions. His decision to help fellow Jews escape from the Jewish Theatre must have been based on his very realistic doubts. Was it an act of resistance? It started with keeping his patients waiting as long as possible at his practice. The Nazi selections stopped promptly at the end of the workday at five, and anyone who was still being treated was lucky for the time being.

At the Jewish Theatre, Jeremias met Jo van Hal, who was a physician there. They got along well and were to remain lifetime friends after the war. In the 1960s, they were even almost neighbours at Sarphati Street 68 and 74 and he was our family doctor for years. But let’s get back to what they were doing at the Jewish Theatre in the war. My father used his skills at making plaster impressions of teeth to make copies of keys. Keys that enabled people scheduled for deportation to leave the premises. Not everyone could be saved, there was always the chance of betrayal, father could be deported himself. He must have been facing enormous dilemmas and his friendship with Jo van Hal was of big help.

How many people were able to escape this way? The documents accompanying the Request to the Queen for Naturalization include twelve letters, testimonies to acts of resistance. So at least twelve people escaped with my father’s help. The letters are from the ones who survived the war, there could have been more.

A regular visitor at the Jewish Theatre was Ferdinand Aus der Fünten, the man appointed to supervise the deportation of the Dutch Jews and known as one of the Three of Breda, notorious (German) Jew-hunters in The Netherlands. The relation between him and Jeremias, the chief executioner and the victim, is hard to imagine today. It helped that both of them had lived in Vienna. They spoke the same dialect and Jeremias, tall with blond hair and blue eyes, had enough flair to easily make informal contact. This proved very convenient when Aus der Fünten warned him he was about to be deported.

Jeremias listened to the clandestine BBC broadcasts including the ones in Polish, which he still had no trouble understanding. Jan Karski, later honored as a Polish Resistance hero, would give eye witness accounts of the events in the Warsaw Ghetto and the Polish extermination camps.

Jeremias told the Jewish Council about what he heard on the radio. The chairmen David Cohen and Abraham Asscher were not happy about it and told him not to spread that kind of horror story.  He was told to go to concentration camp Theresienstadt with his child and report what he heard to the Jewish Council there. He told Aus der Fünten where he was going, who responded with a cynical laugh and crossed Jeremias and his son of the transport list.  The hunter advised him to stay safe.

Jeremias followed Aus der Fünten’s advice, went into hiding, tried to stay alive by not wearing his yellow star on the tram and practicing his profession as a dentist in secret. He had a couple of very close calls. One of the rare stories he told was about his arrest during a round-up on Weteringschans. It wasn’t specifically a round-up of Jews, it was a reprisal for an attempted attack by the Resistance. The men who were arrested had to line up and pull down their pants one by one. If they were circumcised, they were shot on the spot. The man ahead of Jeremias was a French refugee from Algeria and circumcised. He was executed. Jeremias could keep his pants on and go on his way. He was arrested again though in May 1943 and sent to the SD Office on Euterpe Street. He was tortured for three days and his kneecaps were fractured. He was put on a train to the penal camp in Amersfoort, but managed to escape. He roamed about and finally wound up in Betondorp, a neighborhood in Amsterdam where he paid the family of a collaborator (!) to hide him and his son.

The Liberation came just in time for Jeremias. The Dutch famine (1944/1945) had reduced his weight to a mere forty kilos, he had starvation edema and was admitted to Prinsengracht Hospital. The normal weight of this 1 m and 95 cm blond-haired, blue-eyed man was ninety-five kilos.

He recovered after the Liberation and continued practicing as a dentist with permission from the Dutch Medical Board. He remarried, this time to Mary Goudeket, a young Jewish woman from Amsterdam who had lost her entire family in the war. They had two sons together, Jacques and Ruben. A young family with older parents who had plenty of problems, even after the war was over, because Jeremias was officially stateless. He preferred being stateless to being Austrian. And he certainly wasn’t interested in being Polish because that would put him under a Communist regime.

One of my earliest memories is of my father’s practice in a former shop on Roeter Street on the corner of Lepel Street. It was near the former Jewish ghetto where so many buildings were demolished. The hatred of Jews was still in the air and local kids would bully us and make life very unpleasant for our parents. We didn’t have a lot of money or comforts to speak of but gradually began to live a more normal life.

In among the ruins, life got back on track. Jeremias remained true to his orthodox Jewish traditions. With other Jews from Galicia and Hungary, he helped breathe new life into the Russian Shul (synagogue) on Nieuwe Kerk Street. Three or four dozen men would gather there to follow the Eastern European Minhac (Jewish customs). The atmosphere was warm and cheerful.

The account given above is a reconstruction of the numerous fragments I have been able to collect. My father barely spoke about the war, if at all. There were two men he adored throughout his life, the Austrian Emperor Franz Joseph and the Polish Marshal Joseph Pilsudski. In his own way, my father learned to love the Netherlands. He passed away on 14 September, 1984. There are so many questions I would have liked to ask him.

The article is translated and an adjusted version as published in Gezichten van Joods Verzet / Faces of Jewish Resistance. Forty portraits of Jews in the Resistance by Jeroen Sprenger (ed.), Amsterdam 2020.

The author expresses his gratitude to his eldest brother Peter G. Barth and to Maria van Beurden Cahn, The Legacy of Jeremias Barth, A Jewish Son of Rzeszów. In: Michchala Galasa I Waclawa Wierzbienca, Z dziejów I kultury. Zydów w Galilicji, pp. 151-157. Universities of Rzeszów and Krakow 2018 and to the translator.

In the photograph from left to right: Mr. D. Aronson, Mr. Leb and Jeremias Barth