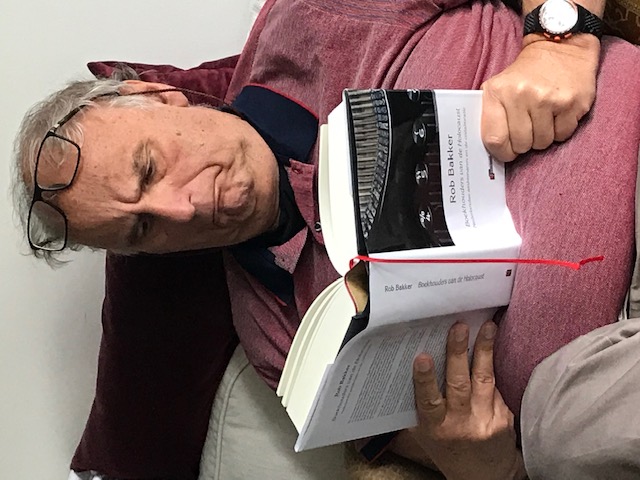 04 May The Holocaust Bookkeepers

The 696-page book by Rob Bakker on the relation between Dutch civil services and the persecution of the Jews was published and we immediately ordered it. And what a pleasant surprise it was! What our parents suspected and what we heard about bit by bit and what we fit together like a jigsaw puzzle has now been scientifically proven. Civil servants willingly, diligently and proactively cooperated with the racist occupying power, which could then heave a sigh of relief because the deportation trains were rolling along more smoothly in the Netherlands than anywhere else.

There is no longer a reason to raise an eyebrow at the high percentage of Dutch Jewish victims (80%) because we are now aware of the whys and wherefores. Normal civil servants who didn’t even sympathize with the Nazi ideology would share what they knew or had experience with at various levels of the bureaucracy, thus enabling mayors and public management to work in perfect harmony. And they knew perfectly well that starting with the registration and what they were doing was not the same as their regular job and had severe consequences. They did not have any particular empathy with Jews. In general, local officials were condescending and had no objections to what they were doing, though pre-war news broadcasts had not predicted very bright prospects for the Jews. They didn’t fail to willingly mark identity cards with a J even if it went against the official instructions not to draw distinctions between Dutch citizens. Via this criminalizing act, civil servants were merely conforming to the Nazi ideology.

With its 696 pages, The Holocaust Bookkeepers serves as a reference book. Ample attention is devoted to such topics such as the Aryan certificate, collaborating police officers, the bureaucracy’s support for economic exclusion, dishonest solicitors, assistance in keeping deportation records, the role of the Netherlands Railways in transporting Jews, the security guards at various work camps (100 camps in the Netherlands!), the failure of the legal professionals, Calmeyer who posed as a savior of humanity with his dubious list, and the court system. It is shocking.

It is appalling that after the catastrophe, our parents were dependent on these very same civil servants. The authorities never came clean, which explains the poor excuse Prime Minister Rutte barely managed to stutter in January 2020. There are no signs that Dutch civil service culture is any different today than it was then, which does not bide well for the future.

The Holocaust Bookkeepers was published just before May 4 and 5, Dutch Remembrance Day and Liberation Day, and had the effect of a bomb with a built-in delayed reaction mechanism.  It was 75 years ago and as Descendants, we know that a new period began for our parents that was supposed to mean freedom but did not bring much joy. Not everyone has clearly told his or her story, not even within the family circle. A lot has been kept in and kept back. We know better than anyone what the consequences have been. We grew up in families where one or both of the parents were traumatized, and we too have suffered from the Shoah. When we read in The Holocaust Bookkeepers about how diligent clerks thumbed through city records in search of extra Jews to add to the list, we are overcome by a wave of emotions. We might not be confronted with the same wall of cold contempt, but the realization that three quarters of a century later, Dutch society is still under the thumb of the same heartless bureaucrats does not cheer us up. Because look at how anti-Semitism is being combated today. The Police Department, the Public Prosecutor’s Office, the politicians, they talk, they fill in forms, but in the end they don’t do anything. Anti-Semitism might be prohibited by law, but the law is not put into effect.