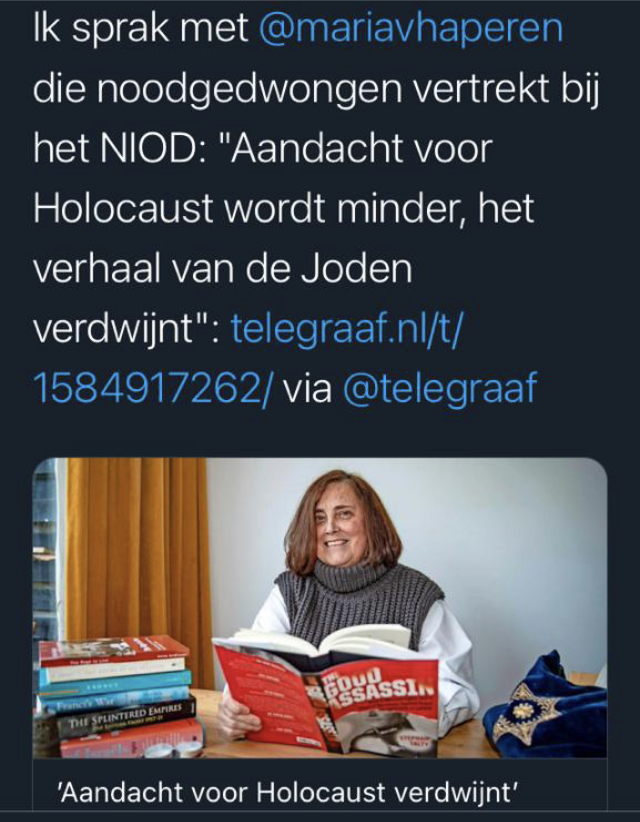 01 Nov Interest in the Holocaust is Dwindling

The text below is a English translation from an original Dutch article written by journalist Wierd Duk of De Telegraaf, the largest Dailey Newspaper in The Netherlands and published on November 1 2020*

For years, Maria Judille van Beurden Cahn, M.A, was in charge of the educational service at the NIOD Institute for War, Holocaust and Genocide Studies. As of 1 November 2020, her position has been terminated and she is extremely upset. “Slowly but surely, the story of the Jews is disappearing. “

The historian is leaving with an aching heart. “It is so important to show the world … Look, this is what causes a disaster like the Holocaust. It destroys people and makes them ill for generations to come. Mentally and physically. I developed a methodology that is praised all across the globe. I taught courses in countries like Poland. Everything I achieved is now disappearing.”

The NIOD says that in the future, it wants to leave the educational activities involving World War Two to other institutions such as the Holocaust Museum, the Westerbork Memorial Centre, the National Monument Kamp Vught and the Anne Frank House. As NIOD director Frank van Vree says, “By now, these institutions have large-scale professional educational departments. At the NIOD, all these activities were conducted by one staff member, who worked eight hours a week (Van Beurden Cahn, ed.). An alternative would have been to expand our activities, but that is not the core mission of the NIOD as academic institute and archives.”

Maria van Beurden Cahn notes that when she leaves, the NIOD will not only be losing a great deal of expertise, it will also lose its international network. “People would come from all over to consult us, secondary school teachers and university lecturers, people who worked at museums and for the Mental Health Care Department. Even officers from the Dutch Army would come to us for special courses. I don’t think any of the other institutions can provide this kind of thing.”

You claim the specific interest in the mass murder of the Jews is dwindling and being replaced by a more general form of genocide commemoration.

“Yes, I see that happening all over. The Jews and their history are slowly but surely disappearing from a wide range of organizations. The Judaism Chair at the University of Leiden, the only one in the country, has ceased to exist.

Evelien Gans, Extraordinary Professor in Contemporary Judaism, Its History and Culture at the University of Amsterdam, was not replaced. Nowadays the Holocaust is commemorated alongside genocides in places like Ruanda or Srebrenica. This development coincides with the departure of many of the Jews of Europe. Jews are not interesting as voters because there are simply too few of them and we barely exert any influence as a lobby group.”

Why do you feel it is so important to approach the Holocaust as a separate phenomenon?

“It is not just about the memory. We, Jews have no problem remembering the Holocaust. It is about passing on the information and warning people about the growing anti-Semitism today. The main thing is to show how these processes are generated and more importantly, to stop them in time. Let me give you a practical example. I was at a college in Amsterdam with a Holocaust survivor to talk to the young people there. A Moroccan Jew came along. All of a sudden, the whole class got up and left the classroom. A lot of them were Moroccan themselves. The Moroccan man was there to show the Moroccan youngsters there were also Jews living among them. I asked the teacher what happened. He said, “They didn’t want to listen anymore because he was Jewish. They started hissing.” I was so angry. I followed them out into the hall and asked why in the world they were behaving that way. A girl wearing a headscarf answered my question. She said the Muslims in the class felt they had been tricked. ‘The imam says we are not allowed to listen to Jews.’ And I had invited the Jewish man along to serve as a unifying element.”

“Transference seems to be virtually impossible at schools with so many Muslims in the class. But it is not always the case. On the same occasion, a Holocaust survivor was telling his story in another classroom. He was having trouble getting his point across. That is only logical, he was very old. The youngsters weren’t really listening to him, they didn’t have the discipline. Until he rolled up his sleeve and showed them the number tattooed on his arm. That made an impression. Suddenly, they all wanted to have their picture taken with him. Look, that was a good learning moment. It wasn’t pleasant for the Holocaust survivor, but he got through it. He had been “through a lot worse in the camps, he said.”

How do teachers at schools with so many Muslims in the class deal with this kind of resistance?

“I see a lot of well-intentioned teachers, but it is a very complex and extensive issue, and they often simply give up on because there is so much resistance. It is not a story about the Golden Age (Netherlands in 17th century) or waves of migration. What I see is that in my field – history – there is a great deal of attention for the Second World War, but less and less for the Holocaust. The way people feel nowadays is that other groups also have a right to tell their story. Other people who experienced Second World War, that is what they mean. And then I think of course they do, but why shouldn’t they all be able to tell their story? Why should one rule out the other?”

What else has changed in the fifteen years that you have been educating people about the Holocaust?

At the beginning, it was about right-wing anti-Semitism. It took a while before it was acknowledged that there was also such a thing as left-wing anti-Semitism. Look at the scandal around Jeremy Corbyn and the British Labour Party. And look at Muslim anti-Semitism, today it is the most common kind. And there is also what can be viewed as abuse of the Holocaust, for example if what happened to the Palestinians is equated with what happened to the Jews. That just is not very intelligent. Or when anti-Vaxxers think up their own version of Arbeit macht free, the cynical slogan above the gate to Auschwitz, and carry signs saying Vaccine makes free. A complete next generation lacks the sensitivity to comprehend the enormity of the Holocaust or the context it occurred in. They are familiar with its symbols but have no idea of the dimensions. That is what we try to make clear to them.”

What are you going to do now?

As soon as I can, I am going to go abroad where people do want to hear this story. I have given courses in a lot of countries including Poland, where the topic of the Polish involvement in the Holocaust is like a minefield. But somehow, I apparently managed to reach them. And I will continue writing about it. I am only sixty, still too young to stop working.