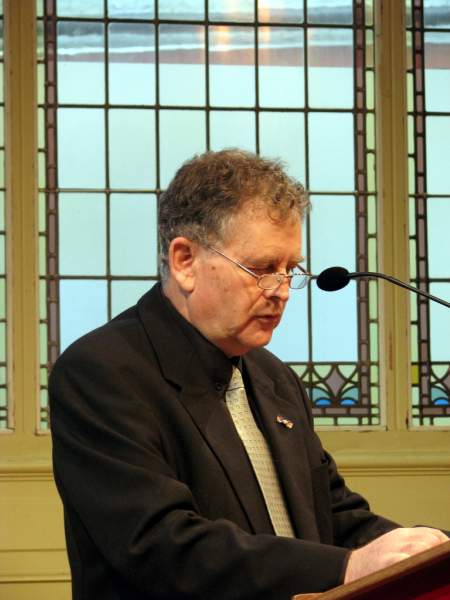 A Jew tip is what he called the offer made by the Jewish Social Work Agency in the Netherlands. MAROR (a Dutch acronym for Moral Responsibility for Stolen Property and the Restoration of Justice) negotiator and former Board member of the foundation of the same name, Philips Staal, presented indexed claims to real estate from the inheritances of Jewish war orphans to the Board of the Jewish Social Work Agency in the Netherlands and got a resounding NO for an answer. The Agency refused to respond to the request for payment. The money from the real estate that was/is inherited by and belongs to Jewish war orphans was used instead for speculation purposes.

The money evaporated into thin air, and there wasn’t anything Philip Staal, his brother Marcel, or any of the numerous anonymous Jewish war orphans, could do about it. This is exactly why Staal calls the tip offered to them blood money and refused to accept it. Various investigations have been conducted, Jewish administrators censored reports published as “verified” after the contents were appropriately revised. The monopoly of commissioners in charge proceeded at full autocratic speed ahead and the management never did arrive at the desired Teshuva (repentance).

Not a single cent to be had, all the money was gone, stock market speculation with the real estate they should have inherited, and the Jewish war orphans were left penniless. No matter how tirelessly Philip Staal fought for proper restitution, in the end he was laughed off as an irritation, a black sheep, an embarrassment. A story that would have wound up in the gossip magazines if we hadn’t been around to recognize the familiar pattern. The sad truth of the story can only leave many Descendants in tears.

“As former guardian, the Jewish Social Work Agency should have stood guard over the inheritance, and up to now we have not seen a penny’s worth  of the real estate that should have been ours. As war orphans, we were under the guardianship of the Le-Ezrath Ha Jeled / Children’s Aid Foundation, which later became part of the Jewish Social Work Agency, and a great injustice was done to us by the Jewish management. Many Jewish war orphans still have no idea there ever was any real estate that should have been theirs.”

Philip Staal is not just anyone. He is one of the signatories of the MAROR agreement and can recall in detail the restitution of Jewish funds just before the start of the new millennium. After negotiations with the Dutch authorities,  banks, Stock Exchange (Stockbrokers’ Association) and insurance companies, the sum total of €347,000,000 as restitution for the stolen Jewish funds was arrived at. Only the Jews could not make any claims after the war because they had been murdered.

The exact amount was a fictive sum owed to the entire Dutch Jewish community. The Dutch authorities could not care less that Dutch Jews did not have a united umbrella organization but were a highly diverse Kehilla of individuals joined in multifarious associations of all sizes and religious inclinations. The nasty question had been dealt with and they were done.

After the talks with the banks, Stock Exchange and insurance companies. Philip Staal joined the MAROR Foundation, which was to divide the €347,000,000 among the members of the Jewish community. To Staal, an economist, it seemed like a logical next step. After heated discussions, a plan was finally adopted and the restitution funds were to be partially distributed to individuals and mostly transferred to a central account now commonly known as MAROR money.

Philip and his brother Marcel are child survivors. Way into adulthood, they continued to believe their inheritance consisted of a shoebox of trinkets that once belonged to their father Isaac and mother Anna. “Some silverware and a couple of photographs, a silver comb and brush, a stamp album and a platinum ring with tiny diamonds,” Staal said in Trouw, a Dutch daily, on 3 June 2004. Afterwards a couple of paintings were added. The discovery that their family owned real estate and they were the heirs and everything had long been sold came as a total surprise. And then came the restitution and it was time to settle the account. At least it would have been, if only the Jewish Social Work Agency hadn’t hid behind the excuse that the financial legacy had been lost on the stock market and restitution was out of the question. An injustice? Yes, an injustice and particularly painful because it was perpetrated by our own people.

Philip Staal has a website with a new column every Tuesday. He names names, tells the whole story and hangs out all the dirty laundry of MAROR and its big shots. You can read about how the independent investigations were quietly covered up, described with great disapproval by the late Arnold Heertje, who was an excellent researcher and proud Jew with strong feelings of justice. About how Philip Staal went to court and found the door slammed in his face by a mendacious stronghold of managers and directors. And about how the Dutch judiciary was reluctant to burn its fingers on internal Jewish matters.

Philip is Staal  a widely read author whose  books, Roestvrijstaal (Delft 2008), Settling the Account (2015) and Mijn erfenis (2016) are still on sale. At https://www.staal.bz/Books/Boek-1/RS/Noten/index.html and https://www.staal.bz/Books/Boek-1/RS/Noten/index., his claims are substantiated. He  wants justice, not a tip. A true return of what he has a right to. Like the acknowledgement when he was knighted in the Order of Orange Nassau by the Dutch Royal family. The monetary restitution claim is still filed against the Jewish Social Work Agency and the MAROR Fund. Why? He and his brother are not the only ones whose legacy evaporated into this air. There has been enough tricky business going on with the property of the Jewish war orphans.

MAROR, Bitter Herbs, it is something Dutch Jews all know about. A source of generous subsidies, where even gentiles can apply to have their projects subsidized. The problem is that none of us know exactly how or why the decisions are made. The Annual Reports are on the website, but the facts are only told in retrospect. There is no transparency in the management of the MAROR Fund, the safety of our communal property. And who gets to appoint the people in charge? Every so often there is a news item in the country’s only Jewish weekly, Nieuw Israelietisch Weekblad (NIW), but it is not exactly reassuring since the weekly can barely manage to support itself and can no longer boast of the quality of journalism it once had. It has been reduced to a censoring news sheet where managers publish what they like and gossip and backbiting set the tone. Quality articles are few and far between unless they come directly from a foreign source.

We, Dutch Jews have a right to something better. Everything out in the open. No political back rooms where self-appointed bosses live a life of luxury holding hands with politicians and pretending to run the Dutch Jewish world.

And whether there are still inheritances left dormant somewhere after three quarters of a century, who knows? Of course it would be naïve to think there aren’t. Whenever it is a matter of what belongs to whom, whether it is property or money, that is when things usually go wrong, isn’t it? Greed and avarice as obnoxious qualities, we are familiar with them from the period right after the war, aren’t we? Take them one level higher and you are in the world of the notary public and Dutch officialdom. The world of Raymund Schütz and Het Nederlandse Notariaat en de Erfenis van de Oorlog (The Dutch Notary Public and the Legacy of the War). The world of Rob Bakker and Boekhouders van de Holocaust (Bookkeepers of the Holocaust). No illusions. Hear no evil, see no evil, just keep saying that till there is nothing left.

But we are asking questions and we are investigating. That is our constitutional right.