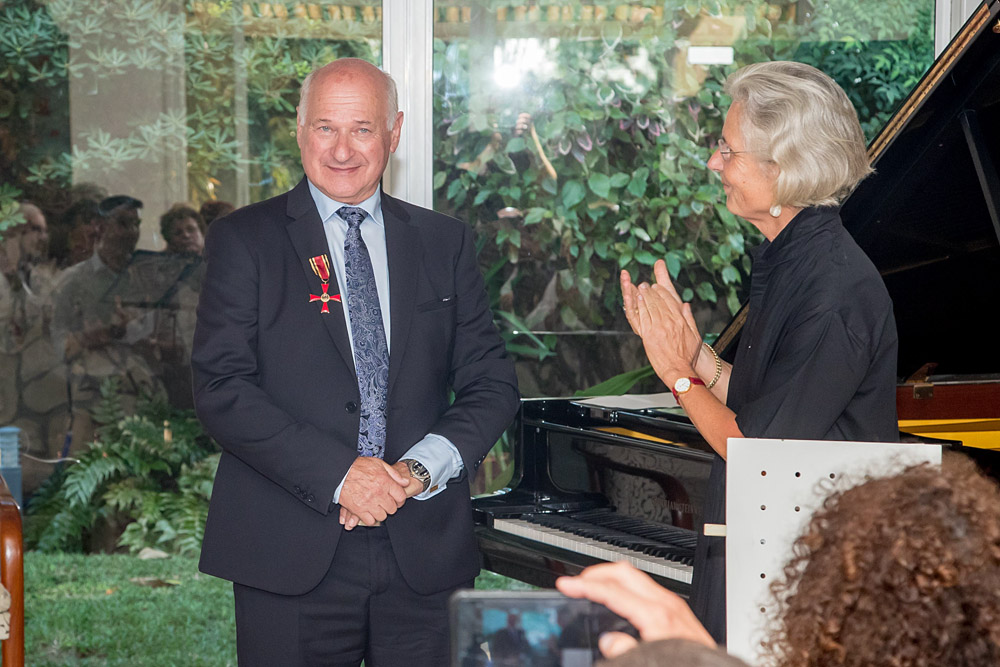 Dear Mrs. Wasum, German Ambassador, Mr. Docter Dutch Ambassador, Mr Loβack former Secretary of State for Education in Schleswig-Holstein, dear family and dear friends. There is a direct line between today’s event and my parents, zichrona levracham, may their memory be a blessing.

I have great admiration and profound respect for my parents who had, with indescribable pain in their hearts, to entrust me to strangers in the hope that I, their first born, would live. Their decision was made of pure love for me, without selfishness.

My parents passed on to me the torch of life, during the darkest time of the Shoah, so that it would not be extinguished, and the chain of Jewish life remains unbroken. Without the courage of my dear father and mother, who had to bow their heads and gave up their lives to the destructive sword of the murderous hatred in the death camp Sobibor,  as well as the bravery of a mother and daughter who smuggled me out of the Ghetto of Amsterdam and the altruistic family who cared for me as their own son until the end of the war. I would not have survived the Holocaust and stand here today.

Today I am awarded by the president of Germany, Mr. Frank-Walter Steinmeier, with the Order of Merit of the Federal Republic of Germany.

It is a great honour for me to receive this Order for my work in Germany as a lecturer on the Holocaust and the implication of discrimination, intolerance and disrespect. Deeply touched and thankful I am for this recognition.

Despite being an orphan, the loss of my family and the difficulties I faced after the Second World War, I developed a positive way of thinking. This optimistic approach created new challenges and opportunities. Being able to overcome the hatred I had for Germany and the Germans, as well as banning of the German language and the boycotting its products. Eventually my constructive approach has brought me to who I am today.

What was it that inspired me to lecture about the darkest time in history, the Holocaust?

On Yom HaShoah, the National Commemoration Day in the United States, April 22, 2004, I had the honour to be one of the six candle lighters at the United States Capitol Rotunda, Capitol Hill, in Washington, DC.

Seated, during the ceremony, next to Senator Joseph I. Lieberman and Senator Tom Lantos, a survivor who passed away some years ago, I was wondering why me? I am not a senator and yet here I am!

After the ceremony I met Ruth Bader Ginsburg at that time Associate Justice of the Supreme Court, Elie Wiesel Holocaust survivor and Peace Prize Winner, and Judea Pearl father of Wall Street Journal reporter Daniel Pearl. They discussed the present-day anti-Semitism and the perspectives of the future.

Not being a senator or a high-profile person in the US, I kept quiet. Unexpectedly Senator Lieberman turned to me and asked me for my opinion. My assessments were different from theirs and they listened attentively to my views. Unfortunately, my valuations became today’s reality.

During my visit to the US, The United States Holocaust Memorial Museum in Washington DC celebrated their tenth anniversary. My wife Annette and I were invited to take part in this celebration.

On this event, the museum inaugurated a special exhibition called ‘Life in Shadows’, Hidden Children and the Holocaust. I had the honor to donate some artifacts that were in my possession. One of them was the unique and unconventional ‘Life Calendar’ drawn by my father in 1942 when I was born. In 24 drawn and colored pictures he expressed his vision about my life. This calendar was blown up to over 2 meters high as an eye catcher at the entrance of the exhibition.

The museum had organized an interview with me at their auditorium for invited guests only. From that moment on it all started.

After the interview many questions were asked, and it became clear to me that there was a certain lack of knowledge regarding Hidden Children of the Holocaust. While answering I shared my opinion and my vision from the perspective of a Hidden Child.

Amongst the audience was Elie Wiesel. He approached me and said: ‘You and I are both survivors, each of us in a different way. Please continue to tell your story and vision as a survivor, it is more than important. You have the capability to inspire people. Please continue.’ I thanked him for his encouraging words.

After my return to Israel, I contacted the International School for Holocaust Studies, Yad Vashem, and I was invited to give my first lecture at the school.

During the years I was approached by many participants of foreign seminar at the school. This led to yearly invitations to be a guest lecturer at the University RWTH in Aachen and to be a speaker at different high schools and the political party ‘Die Grünen’ in Germany.

Since 2012, I also give lectures in Schleswig-Holstein, Lübeck. In 2016, on a yearly basis I started also to give my presentation ‘Life Calendar of a Jewish Boy’ – ‘Lebens-Kalender Eines Jüdischen Jungen’ at the ‘Polizei Akademie’ in Eutin near Hamburg.

The highlight of my mission as a guest speaker takes place in the week before and at World Memorial Day of the Holocaust in Germany. Besides in Germany I also lecture in other countries. Notwithstanding the tremendous psychological damage and pain, I was capable to choose a different path: NO CHARGE!  –  NO ACCUSATIONS!   Instead, in my presentations and my lecturers, I hold a mirror in an authentic way in front of my audience so that the unprecedented crimes carried out in the Shoah, do not repeat themselves. Don’t forget, we must learn from the dark past, then ‘Never Again’ becomes a reality.

To convey a message to the younger generation is my voluntary task, to think independently, to study history, search for the truth, judge for oneself and to have the ability to make space for others.

My goal is to build bridges, not out of steal, wood or concrete, but build on vision and courage. Building peaceful societies starts with education of the youth. Knowledge of history is the key for a brighter the future

The award I received today, is irrefutable a proof that my vision and effort of building a better world by learning from the past is acknowledged. This honour the ‘Verdienstorden’ gives me more strength, more courage and will power to teach the consequence of discrimination, disrespect and intolerance. I am grateful to the president of the Federal Republic of Germany Mr. Steinmeier, and thankful to everyone who nominated me for this honour. Many thanks to you for being present to witness this ceremony. A special gratitude goes out to my daughter Natali who assisted and supported me over the years. I appreciate her input and that she accompanies me on my travels. Her part in this, complements my mission as she enlightens the impact of the Holocaust on the next generations. With the belief that the love for me and the courage of my parents does not inspire me alone, but also encourage the next generations to stand up to discrimination. From the depth of darkness there can a be trace of light what lead us to a better world, so our children and the next generations are blessed with peace and prosperity.